Fourteen-year-old guitarist Brandon Niederauer is living proof that dreams really do come true. Having played in the most legendary rooms in America with some of the most prominent musicians of our time, the young guitarist/singer/ songwriter has built up quite the reputation in the music world, welcoming the nickname “Taz” amongst fans and peers alike.

It started when Brandon watched the movie School of Rock at eight-years-old. Also inspired by his father’s record collection,
he instantly realized he wanted to play guitar. Four years later, he was cast as the principle role of guitarist “Zack Mooneyham”
in the Tony Award- nominatedAndrew Lloyd Webber Broadway production, School of Rock the Musical at the Winter Garden Theatre.

Since performing on the Ellen DeGeneres Show at the age of ten. Brandon has made additional national television appearances
on The Late Show with Stephen Colbert, Good Morning America and The View.

Brandon was interviewed by Guitar Player Magazine in February 2016.

He has performed at the opening of major conventions including the IBM Edge Convention and the AVID Connect Protools Convention.

Brandon has been booked for the National Association of Music Merchants (NAMM), the International Blues Challenge in Memphis,
Harvest Jazz & Blues Festival, Otis Taylor Trance Blues Fest, Doheny Blues Festival, Tampa Bay Blues Fest, Bear Creek Music Festival and twice for The Big Blues Bender. He also played on Jam Cruise, Gathering Of The Vibes, Mountain Jam, Thunder Bay Blues Fest and twice at The New Orleans Jazz & Heritage Festival. He's been invited to play Madison Square Garden, The Barclay's Center,
The Capitol Theatre, and frequently shares stages with top bands touring through the New York area.
He was the youngest musician to ever take part in Jon Batiste’s Social Music Youth Mentoring Program and was the winner
of the Fernando Jones “Blues Kid of The Year” competition in Chicago. 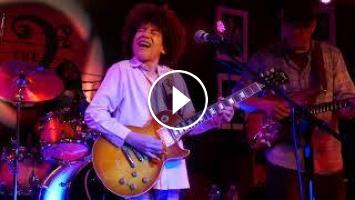 Fourteen-year-old guitarist Brandon Niederauer is living proof that dreams really do come true. Having played in the most legendary rooms in America w...